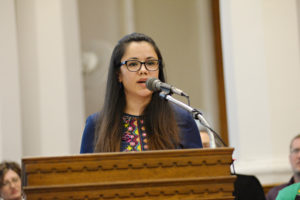 A native of Mazar-e-sharif, Afghanistan, Shogofa traveled to Seattle from Massachusetts to begin her fellowship with Sahar in July of 2018. She earned her Bachelor of Arts in International Relations from Regis College in Weston, Mass., graduating with honors in 2016. During her time at Regis, Shogofa was a member the Pi Gamma Mu International Honor Society in Social Sciences, was accorded the Mary C. Bryan Award for an essay on women’s rights in Afghanistan, and was named a “Pillars of the Community” honoree.

Shogofa’s childhood education was interrupted in 1995 due to the ascendancy of the Taliban, but she has since dedicated her life to learning and service, with a focus on the rights of girls and women in Afghanistan. She began contributing poetry to the Afghan Women’s Writing Project in 2009 and attended the School of Leadership Afghanistan (SOLA) in 2010 before making her way to the U.S. to further her education. In addition to her studies, Shogofa served as an intern for the Feminist Majority Foundation, contributing to a project aimed at providing more educational programs for women in Afghanistan. She also worked in the office of U.S. Rep. Seth Moulton, researching immigration issues.

Shogofa believes that being a woman in Afghanistan is not about being oppressed, weak and afraid, but rather involves learning what is necessary to become strong. Her desire is to promote the education of women, support their rights, and advocate for gender equality. Shogofa is confident that her passions will be supportive of Sahar’s mission to create real, positive change for the girls and women of Afghanistan.